ALL EVENTS -CANCELLED DUE TO CORONAVIRUS OUTBREAK

The Batchelor family were part of village life from the late nineteenth century through to nearly the end of the twentieth century and their legacy lives on in Batchelor's Yard, off School Lane. The following article was written by Judith Long and appeared in the November 2018 edition of the Mickleham Parish magazine. We are very grateful for the assistance of Simon Batchelor - the Grandson of Ted and Lily Batchelor - who has enabled us to add a little more detail and more photographs.

Lest We Forget - The Batchelor Family

As the centenary of the 1918 Armistice approaches, our thoughts inevitably turn to those who died for their country in the First World War, their names commemorated on countless memorials in the countries where they lived, worked and died. However, the names of those who survived their war service are not always so easy to find. With that in mind, this is the story of the Batchelor family of Mickleham who sent five sons off to war.

George Sylvester Batchelor, a bricklayer, and his wife Annie moved to 5 Chalkpit Cottages in Mickleham after they married in 1890. Their first son, George Victor, was baptised at St Michael’s in February 1891 and over the next fifteen years five more sons and two daughters were born. Three of the boys in particular were given rather unusual names: Lancelot Barrington, Percival Broughton and Edward Septimus (later known as Boy, Percy and Ted).  By 1900 George Sylvester, now a builder, had become the landlord of the William IV, where the family lived for the next ten years.  They must have been difficult years because, in 1903, son Leonard, aged 11, fell out of a tree on Mickleham Downs, fractured his spine and became paralysed. Further tragedy struck when Annie died in 1910, aged only 48.  Soon after her death the family left the William IV and the 1911 census shows George and seven of his eight children, including Leonard, living at 1 Elm Cottages on Byttom Hill.

It seems hardly surprising that after appeals were made for army volunteers, following Britain’s declaration of war on Germany in August 1914, Percy, a grocer, and his brother Horace, a carpenter, were keen to enlist. With their mother dead and the family living in cramped conditions, they no doubt viewed going to war as something of an adventure.  They travelled to the recruitment office in Kingston on the 30th August and joined the 7th Battalion of the East Surrey Regiment. This was the same Battalion to which Harry Edgington (their Mickleham classmate who died in France in 1917) had been assigned ten days earlier.  Horace was given service number 463 and Percy 465 (who received 464 I wonder?). In September the Dorking Advertiser published a list of fifty-eight Mickleham men who had joined the army. This included their brother George Victor (by then no longer living in Mickleham) of the Royal Engineers. He is almost certainly the George V Batchelor who was commissioned and in 1917 awarded the Military Medal.

The 7th Battalion arrived in France in June 1915 and from the 30th September took part in the Battle of Loos, followed by the Action of the Hohenzollern Redoubt on the 13th October. Both Horace and Percy were wounded during this period and Horace’s wounds were sufficiently serious that he was declared to be no longer fit for service. He was transferred to a hospital in Lincoln where he wrote to Edward Davies, the Mickleham Parish Clerk. His letter, published in the Dorking Advertiser, describes how he was hit by shrapnel and that “the fellows all kept wonderfully cool, though I guess it takes more than a shell or two now to frighten us, for we are used to these long since”. He was given a Silver War Badge, awarded to service personnel who had been honourably discharged due to wounds or sickness. These were worn on civilian clothes and prevented the recipients from being accused of cowardice by avoiding military service.

Percy finished the war as an officer before embarking on a career as an accountant/company representative working in West Africa, principally Nigeria. Lancelot, born in August 1900, was too young for full military service but he joined the Royal Flying Corps as a ‘boy’ in 1917 before transferring to the RAF on his eighteenth birthday for the last few weeks of the war. Edward (Ted) Batchelor lied about his age in October 1918 and joined up too. All his brothers were home by Christmas to echo the famous phrase, but Ted was in a tent on Camberley Common. The signing of the Armistice must have been a cause for celebration in the Batchelor family with all five sons who served in the military having survived the war. Sadly, their disabled brother Leonard died a few days later and was buried in Mickleham on the 20th November.

After the war, Lancelot, Horace and Ted joined their father in his building company, all of them living to begin with at 1 Elm Cottages, with sisters Queenie and Georgina. In the mid-1920s the family built and moved to Mon Repose on School Lane, running their business from Batchelor’s Yard nearby. Even after the brothers married they stayed on in Mickleham: Lancelot at Mon Repose, Horace in one of the newly-constructed houses in Dell Close and Ted back at Elm Cottages until he moved to Downs View (also built by the family). Georgina married and moved to Hampshire, whereas Queenie remained single and moved to 2 Thorn Cottages in the 1950s. She died at Pinehurst Nursing Home in 1990 and there is a bench in St Michael’s churchyard in memory both Queenie and her twin brother, Boy. The last remaining sibling was Ted who died in 1995. Eleven members of the Batchelor family are buried in the churchyard and I wonder if George and Annie would have been surprised to know that, almost 130 years after they arrived in Mickleham, a significant number of local residents still personally remember some of their children.

But what became of Percy? He finished the war as an officer before embarking on a career as an accountant and company representative in West Africa, principally Nigeria. Ships’ passenger lists show that he always travelled first class. In 1947 he and his wife, Emma, moved to Guernsey where he raised tomatoes. Sadly, Emma died young but Percy lived on to the age of 91. 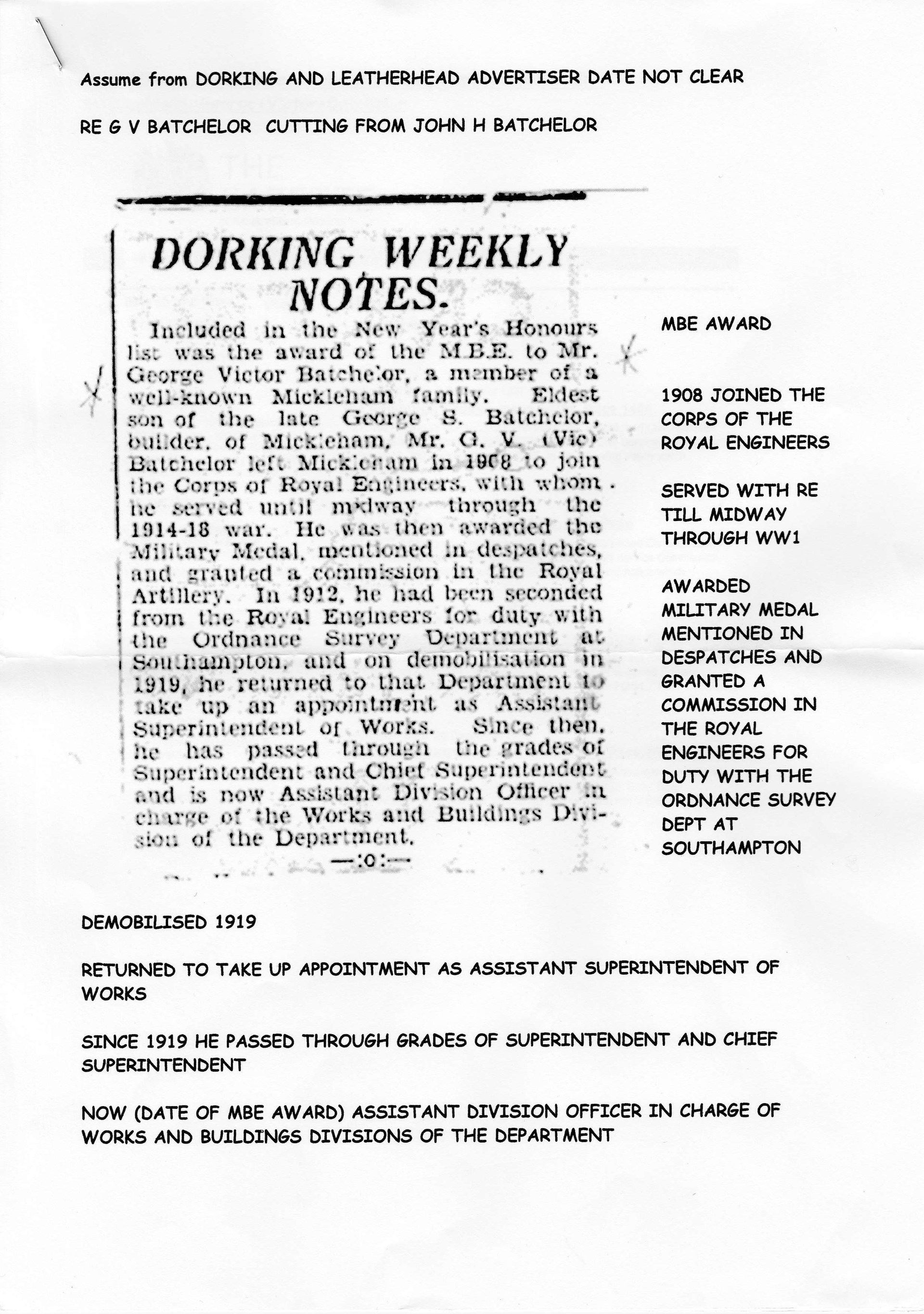